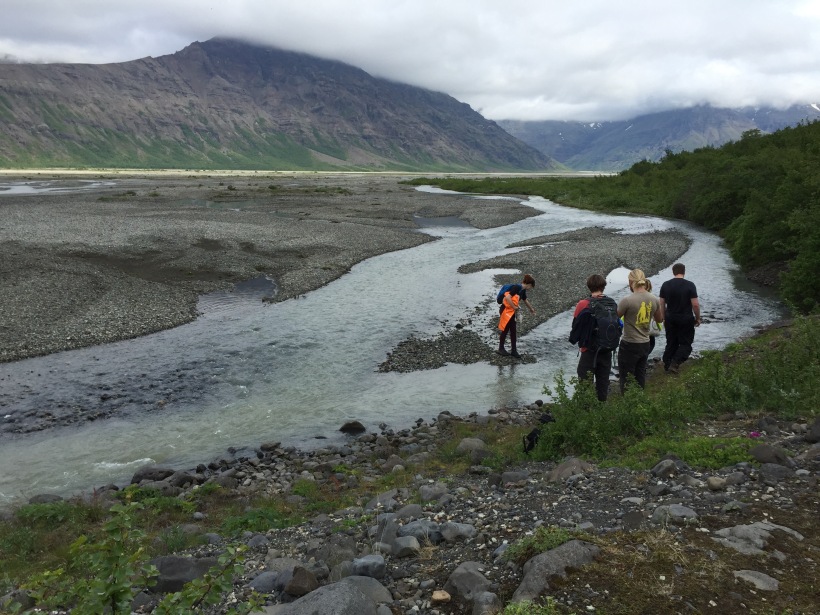 Torture, for me at least, I have discovered is ice cold feet.

Today (and yesterday) we were clearing lupins from near the Morsá river in the National Park. To get to today’s section we had an hour long hike along the river valley followed by a crossing of 5 strands of the river to get to an island covered in lupins. The river was quite fast flowing but relatively shallow, sadly not shallow enough for boots. Being the city dwelling, desk bound type that I am means my feet are not hardened to temperature or surface. Wading ankle and knee deep in glacial meltwater is not fun and to be honest I did not handle (footle?) it well.

What ever doesn’t kill you makes you stronger?

Oh and thanks to Dave Stevens for this:

Lupins are not native to Iceland and yet you can see them everywhere, swathes of quite beautiful bluey purple can be seen from high up, by the roads, at the airport, pretty much everywhere. I remember them growing on the   Mt Lasson volcano in California (where one species is native, though the one in Iceland which is Alaskan – Lupinus nootkatensis), they clearly like volcanic soils. The idea of introduction was to reduce erosion, promote soil production, reduce dust storms amd they do this well but often to the detriment of native plants, this is often the case with introduced species. So in the National Park at least they (we) are attempting to remove/control lupins and give the native plants space and time to re-establish themselves.